Passing Wind stands alone as the life’s work of an incredibly skillful yacht builder, designer and master craftsman, Vic Carpenter. This 62’ custom racer/cruiser, with plank on beam construction and coated inside and out with epoxy resin, is a stunning piece of work that was completed in 1992.

Built over a six year period, she was to be his last construction, built for his own personal use and launched from Canada on Lake Huron and sailed there until 1999. Passing Wind, formerly known as Van Ki Pass, was moved to Newport, RI, after Carpenter’s decline in health where she sat under wraps for the next six years. With only her 90′ spruce spar visible, a local discovered her and fell in love. Everything else on the boat was perfectly preserved, from the incredible woodwork and finish to the brand new suit of Vectran sails and lines. The boat was brought up to speed with new electronics and equipment, and she went on to win her class in the 2006 Newport to Bermuda Race.

There are no shortcuts in Carpenter’s craftsmanship and woodworking as the attached (Documents section) 1982 WoodenBoat Magazine article chronicles the builder’s process and complete fascination with perfection. All doors are one-piece solid slabs of Honduran mahogany. The inlay work on the counters, tables, and transom, all done by Vic himself, are worthy of any art gallery. Unbelievably for a boat constructed in 1992, Passing Wind is built entirely from wood, from her hull to her 1″ thick decking constructed from three layers of laminated red cedar and mahogany. The majority of the metal fittings—from the milled and shaped aluminum toe rail to the intricately laminated wood wheel to the mast track that twists its way upward starting below the boom—were custom designed and hand-crafted by Vic. Custom hardware and exquisite woodworking details abound with its parquet cabin sole and fine leather-covered settees and cushions. The layout speaks of the owner’s wish to have a competitive ocean racing yacht with sumptuous yet practical accommodations. There is not an inelegant detail aboard the vessel and even the bilges are beautifully finished. Passing Wind is spectacular in all facets of detail and she is truly one of a kind. No wonder she took six years to build.

All auction participants must register on this site (upper right “Sign In”). The deposit to bid on the 62’ Vic Carpenter 1992 is $50,000. Deposits will be held in escrow with the Listing Brokerage, Ashley Yachts, and must settle in their account prior to access being granted to bid. Bidding will open at $400,000 and the official Reserve Price is $450,000. Should the Reserve not be met, the high Bidder agrees to leave their bid open for a period of 24 hours following the conclusion of the auction during which time the Owner considers the offer.

Vic was not only a master boatbuilders, he was also a designer and architect and much more. Driven by his art, fed by his mechanical genius, propelled by his perfectionism, motivated by his creativity, and inspired by his love of sailing, he designed and built every yacht from stem to stern. He designed and built sailboats, speedboats, ice boats, kayaks, hang gliders, hydrofoils, houses, cottages, ski chalets, motorcycles, engines, hydraulic lifts, propulsion systems, if he could imagine it he could construct it. So he did. Vic’s driving passion, though, was wood sailboats.

Because his yachts were original and unique, Vic manufactured the accessories as well. Although his true love was working with wood, he became an expert in everything that interested him. Vic was a also a master welder, lathe operator, electroplater, draftsman, sailmaker, upholsterer, varnisher, sander, airbrusher, sign painter, rigger, electrician, plumber, mechanic, sailor, navigator, heavy equipment and crane operator, transport trucker, certified marine surveyor, diver, lifeguard, tattoo artist….and US Navy Frogman. He poured his own keels, sewed his own sails, created his own hardware, crafted all the leather upholstery, inlaid his own exotic wood design, built his own spars (laminated Sitka Spruce) and rigged them internally so there would be no clanging rigging.

Vic had a unique personality befitting his genius. He had a hilarious sense of humor and absolutely no tact. He was fascinated with learning how things worked and with gaining new experiences. In his youth, he travelled to continental US either as a long-haul truck driver in his Peterbilt or on of the Harley chopper he built himself. He once spent a month in British Honduras (now Belize) just to see for himself how his favorite building material, Honduran Mahogany, was forested and processed.

Passing Wind was the original name given by Vic. The name was changed by a previous owner to the French Creole, Van Ki Pass, which is a direct translation to Passing Wind. Vic passed away on January 25, 2012 at the age of 82. 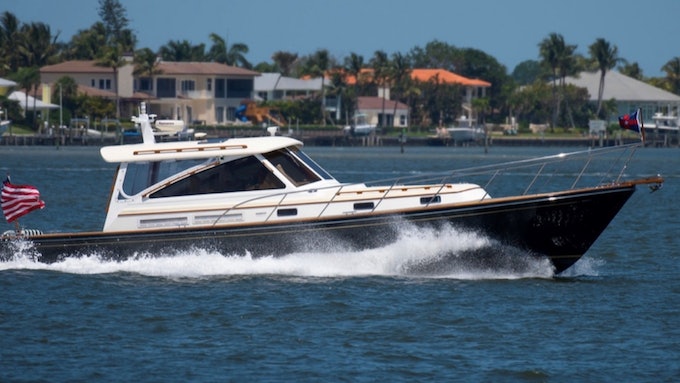