The minimum price at which the Seller is willing to sell the applicable Yacht. In some cases, the seller may reduce or waive the Reserve prior to or during the auction.

Little Harbor Marine was founded in Portsmouth, Rhode Island, by famed yachtsman, sailmaker, innovator, America’s Cup winner, and naval architect, Ted Hood. Recognizing the shift from sail to power, in 1987 Hood purchased the assets of the Black Watch company, the boat builder based on Raymond Hunt Designs, and began his journey into the world of power boats with his line of Little Harbor Whisperjets, the water-jet powered yachts.

In 1999, Hood received an offer to sell Little Harbor Yachts to the investment company that had purchased The Hinckley Company just two years earlier. Although Little Harbors are no longer being actively produced, amazingly there are more than 6,000 sailing and motoryachts, ranging from 35 to 135 feet, that proudly remain on the water today.

Vesper represents a very special opportunity to acquire a Little Harbor Whisperjet 44 just out of a major refit and in need of nothing. Every system was inspected and replaced or inspected and rebuilt to today’s specifications. Vesper is an impeccable example of Ted Hood’s finely crafted WhisperJet 44 Express Cruiser featuring a modern deep-V hull form (designed specifically for jet drives) with an innovative twin chine configuration that minimizes waterline beam for performance and fuel economy while maximizing interior volume for accommodations. Powered by twin 420 hp Yanmar diesels (fully rebuilt in 2022, now with 25 hours) and paired with Hamilton Waterjets, the propulsion provides superior maneuverability in tight quarters and thanks to her brand new Joystick control system by Control Engineering, docking is truly a breeze.

Vesper is a seaworthy yacht capable of serious cruising and can comfortably be run up on a sandy beach with her 2’1” draft and no underwater appendages. Available only due to a change in plans of this vessel’s second owner, Vesper is a rare find that represents a remarkable opportunity to own this recently restored and iconic yacht.

AUCTION PROCESS:
All auction participants must register on this site (upper right, click “Sign In”). The deposit to bid on the 44′ Little Harbor Whisperjet is $25,000. Deposits are held in escrow with the Listing Brokerage, Hinckley Yacht Brokerage. Bidding opens at $275,000 and the official Reserve Price is $300,000. Should the Reserve not be met, the high Bidder agrees to leave their bid open for a period of 24 hours following the conclusion of the auction during which time the Owner considers the offer. 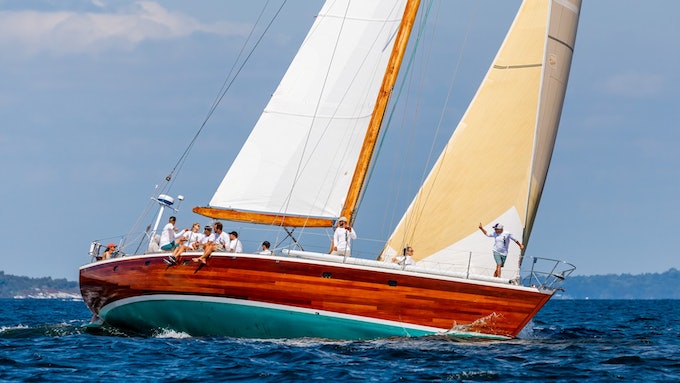